There are lots of supplements that are marketed to adults who have difficulties in controlling their weight. One of these is 5 HTP or 5 hydroxytryptophan. The supplement which is derived from the West Africanplant Griffonia simplicfolia is said to be effective in suppressing one’s appetite.

The human body actually produces 5 HTP. It does so by converting the chemical L-tryptophan that is found in high protein foods such as meat, fish, pumpkin seeds, and dairy products. 5 HTP is then converted to serotonin, which is known for regulating mood, sleep cycles, and appetite suppression.
However, the conversion of L-tryptophan to 5 HTP is limited due to an enzyme called tryptophan hydroxylase which serves as the catalyst. Factors like stress, insulin resistance, and vitamin B6 deficiency can contribute to the difficulty in or limited conversion of tryptophan to 5 HTP.

This explains why there are lots of 5 HTP supplements available today, as the 5 HTP compound can go to the bloodstream and cause the increase in serotonin levels in the brain. 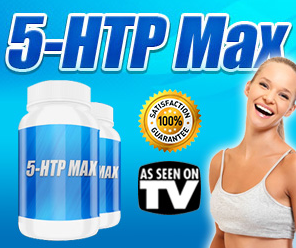 Serotonin is a specialized brain chemical or neurotransmitter that scientists fondly call as the mood molecule. This is due to its special traits like ability to control mood, pain levels, regulate sleep and control appetite.

By taking a 5 HTP supplement, you can increase serotonin levels in your brain. This will help you sleep easily again as serotonin can hasten production of melatonin, the hormone that regulates sleep-wake cycles.

Serotonin can also reduce anxiety as well as improve your mood. Adequate amounts of the neurotransmitter in the brain can also alleviate pain and stress of fibromyalgia.

Increased levels of serotonin in the brain have also been found to have an effect on appetite suppression.

One study in 2006 conducted by a specialist from the UT Southwestern Medical Center showed that serotonin activates certain neurons and melanocortin-4 receptors, which enable the neurotransmitter to curb appetite. At the same time, serotonin blocks other neurons that often act to increase appetite, according to the study conducted by Dr. Joel Elmquist, a professor of internal medicine at UT Southwestern.

Elmquist’s findings, in a way, supports earlier claims that 5 HTP supplementation can curb appetite. These studies all the more deny rumors that you can gain weight with 5 HTP.

In 1992, researchers in Italy conducted a study featuring obese adults. The study lasted for six weeks, with half of the subjects taking 5 HTP while the other half were given placebo.

Even without special diets, those who were given 5 HTP had lost a significant number of pounds. More specifically, the subjects said they ate fewer foods rich in carbs because they always felt full. This in turn, led them to eat less and contributed to the weight loss.

At the end of the study, those who took 5 HTP lost an average of 3.7 pounds while those who were given placebo only had a 1.1 pound average loss. The researchers concluded their study saying that 5 HTP may safely be used for weight loss as well as in treating obesity.

There are some online speculations that 5 HTP and weight gain are connected with each other, since the former can also increase the levels of cortisol in the body. Others also speculate that 5 HTP supplement manufacturers don’t want to make public this effect of the compound because they’re mainly after promoting 5 HTP as a weight loss pill.

Cortisol is the hormone that the body releases when you are stressed out. According to some scientists, an increase in the levels of cortisol can contribute to a gain in weight because people can tend to overeat when they are stressed.

This may be the reason why you’ve heard questions like ‘does 5 HTP cause weight gain.’ However you should realize that there are no clinical studies or tests which prove that 5 HTP can really cause overeating and weight gain.

HOW TO TAKE 5 HTP FOR WEIGHT LOSS

Now that your fears on 5 HTP potentially causing weight problems have been addressed, you might then ask— how do I take 5 HTP for weight loss?

There’s no universal dosing on 5 HTP, although many experts believe that the safest dose for starters is 50 milligrams taken once a day. You can increase the frequency to three times a day after a week or so, or if you notice that your appetite has not been suppressed at all.

You can find 5 HTP supplements in your local pharmacy or stores that sell herbal supplements. These supplements are found in the range of 50 to 200 milligrams.

To prevent 5 HTP side effects you should not take the supplement if you have cardiovascular disease, lupus, or any form of cancer. Serious side effects of this supplement include anxiety, fast heart beat, aggression and high blood pressure. It is unlikely you will experience these side effects as long as you don’t go beyond the recommended dosage.

Of course, it would help a lot of you if you incorporate regular exercise in your schedule. While 5 HTP has been proven to be effective in suppressing your appetite, you can hasten your weight loss if you regularly exercise. Simple aerobic exercises like brisk walking, jogging and biking should be enough. And since you’ll be eating less when you take 5 HTP your caloric intake should be lower and this can cause a significant reduction in your body weight.

5 HTP and weight gain absolutely have nothing to do with each other. So don’t fret. Taking 5 HTP supplements should make you feel full the time and make you slimmer.